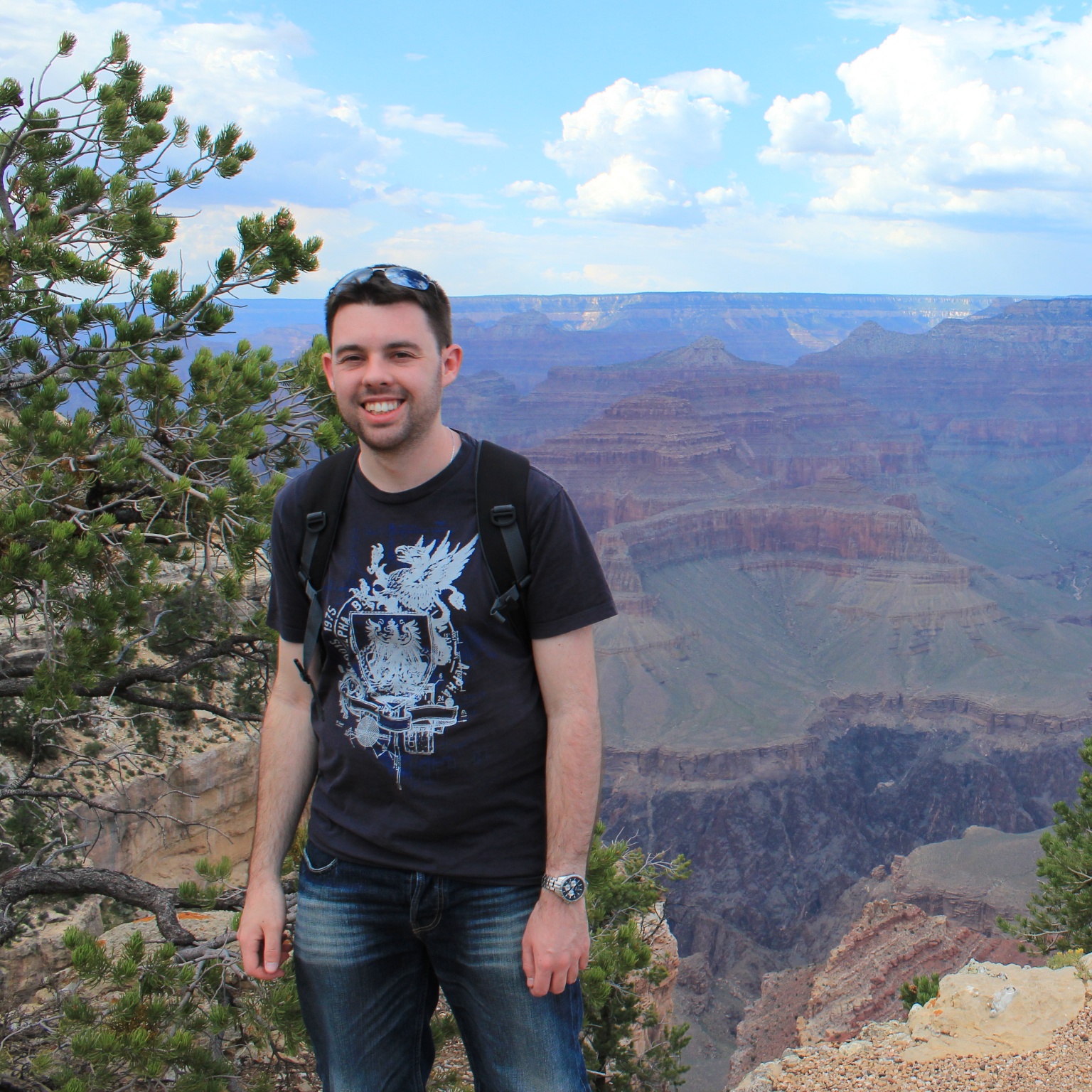 Certain mutations are more surprising than others. DNA is composed of a string of nucleotides, which are either pyrimadines (cytosine or thymine) or purines (adenine or guanine). A single point mutation to DNA is either a transition from one pyrimadine to another or one purine to another, or a transversion from a purine to a pyrimadine or vice versa. Transitions are biochemically easier than transversions, and hence much more commonly occuring in the evolution of genomes. 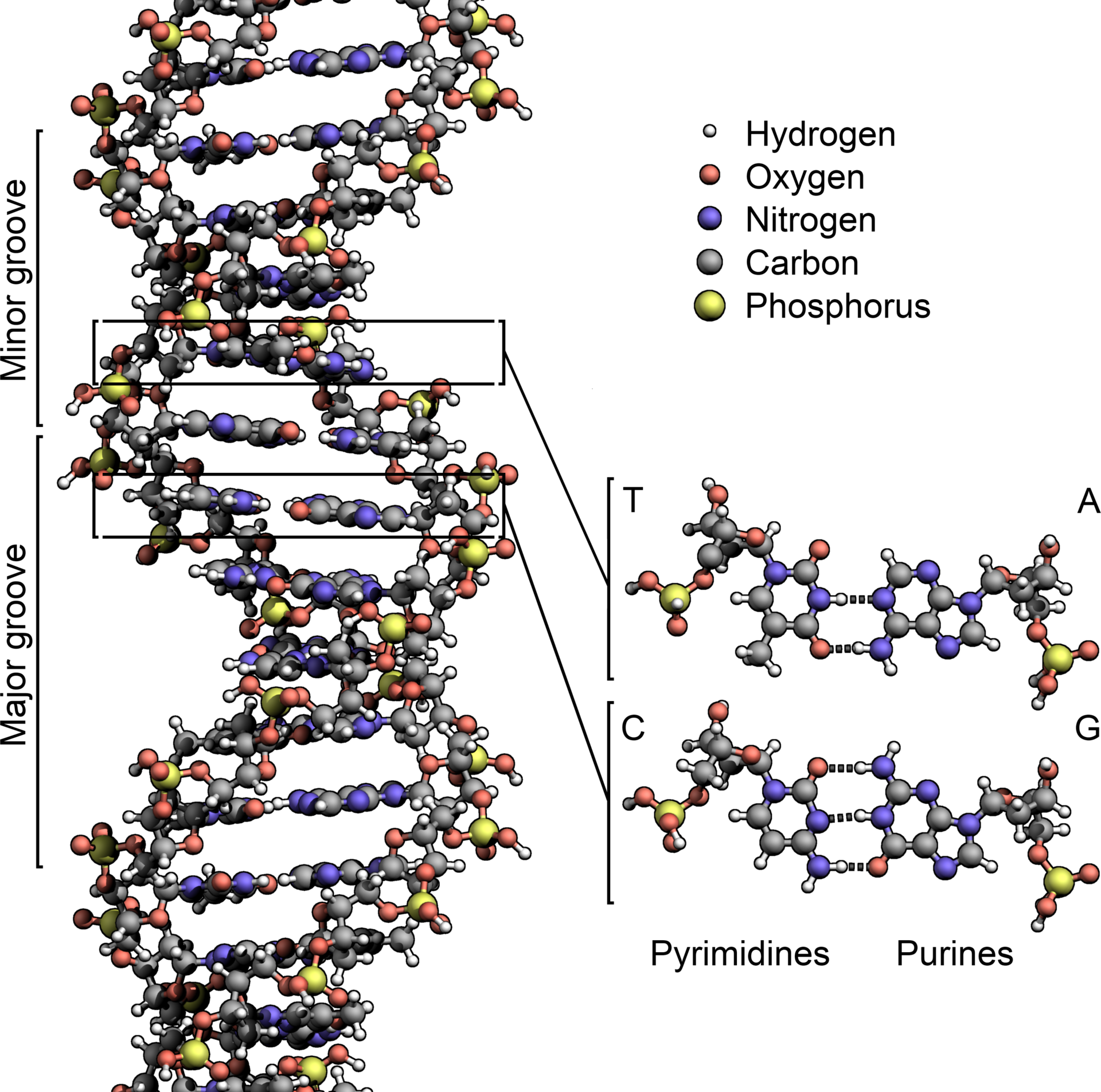 This principle also applies to traits. Dollo’s law states that complex characters, once lost from a lineage, are unlikely to be regained (Wright et al. 2015, Dollo 1893). For example, the evolution of flight in bats required the evolution of multiple components like wing membranes, a novel complex of muscles and low-mass bones (Cooper et al. 2010). Once any one of those components are lost the others are likely to be lost too. Because regaining the trait will require so many components to be regained, it is unlikely. Therefore we should be more surprised by a transition from flightlessness to flightedness than the reverse. 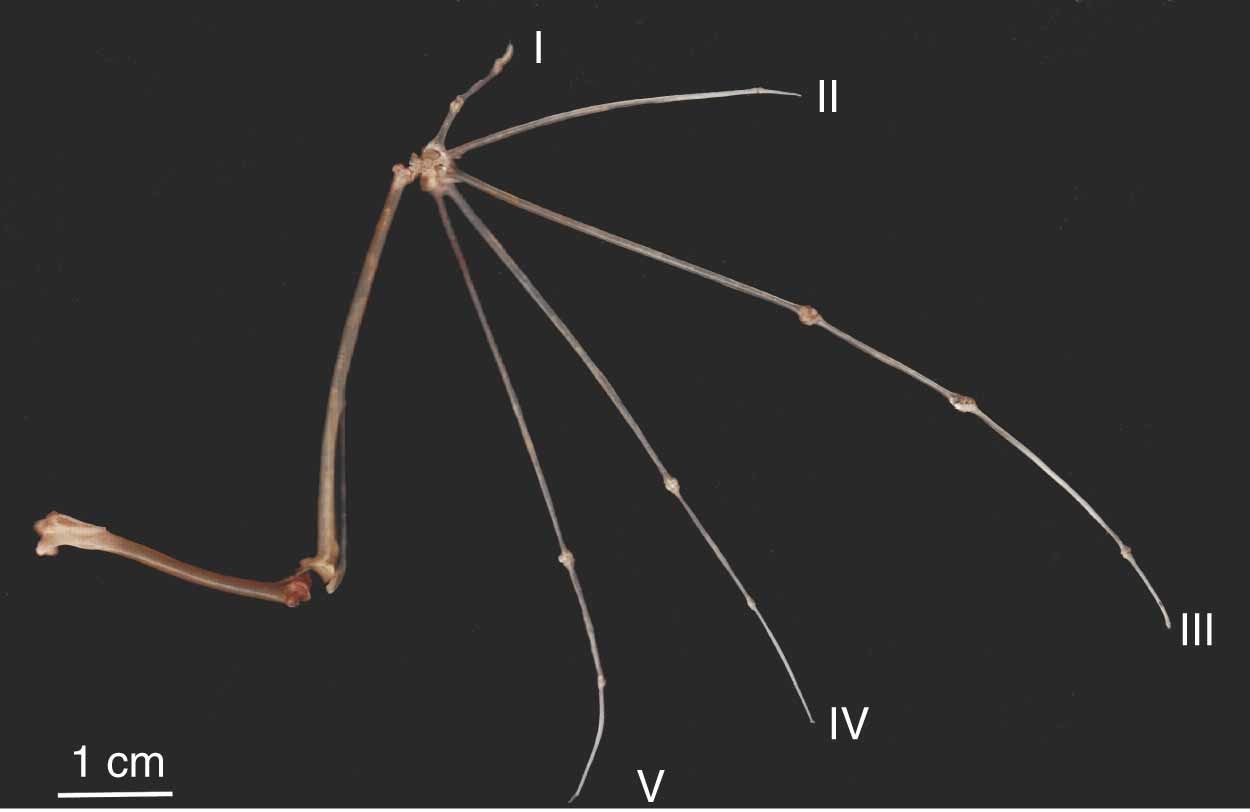 Equal-cost parsimony, for example when using the Fitch algorithm, does not account for this kind of difference in expectations. However unequal-cost parsimony uses a cost matrix to assign different costs to different transitions. For the DNA evolution example, it might look something like this:

In the above matrix, plus is used to indicate the presence of a trait (e.g. flight) and a minus indicates the absence. This kind of matrix is known as a Dollo model, where only forward transitions (from + to -, i.e. losing the trait) are allowed, and reverse transitions are prohibited. Using this model implies that the trait must have been present in the most recent common ancestor (MRCA) of all species in the tree, so it will be inappropriate to use when the trait was absent from the MRCA.

The Sankoff algorithm uses dynamic programming to efficiently calculate the parsimony score for a given tree topology and cost matrix. Let’s use the DNA cost matrix above to demonstrate it.

To initialize the tip node vectors, set the cost for the elements corresponding to known tip states to zero. The other states are known to be not true, so they should never be considered. This could be achieved by setting their cost to infinity, represented here by dots. 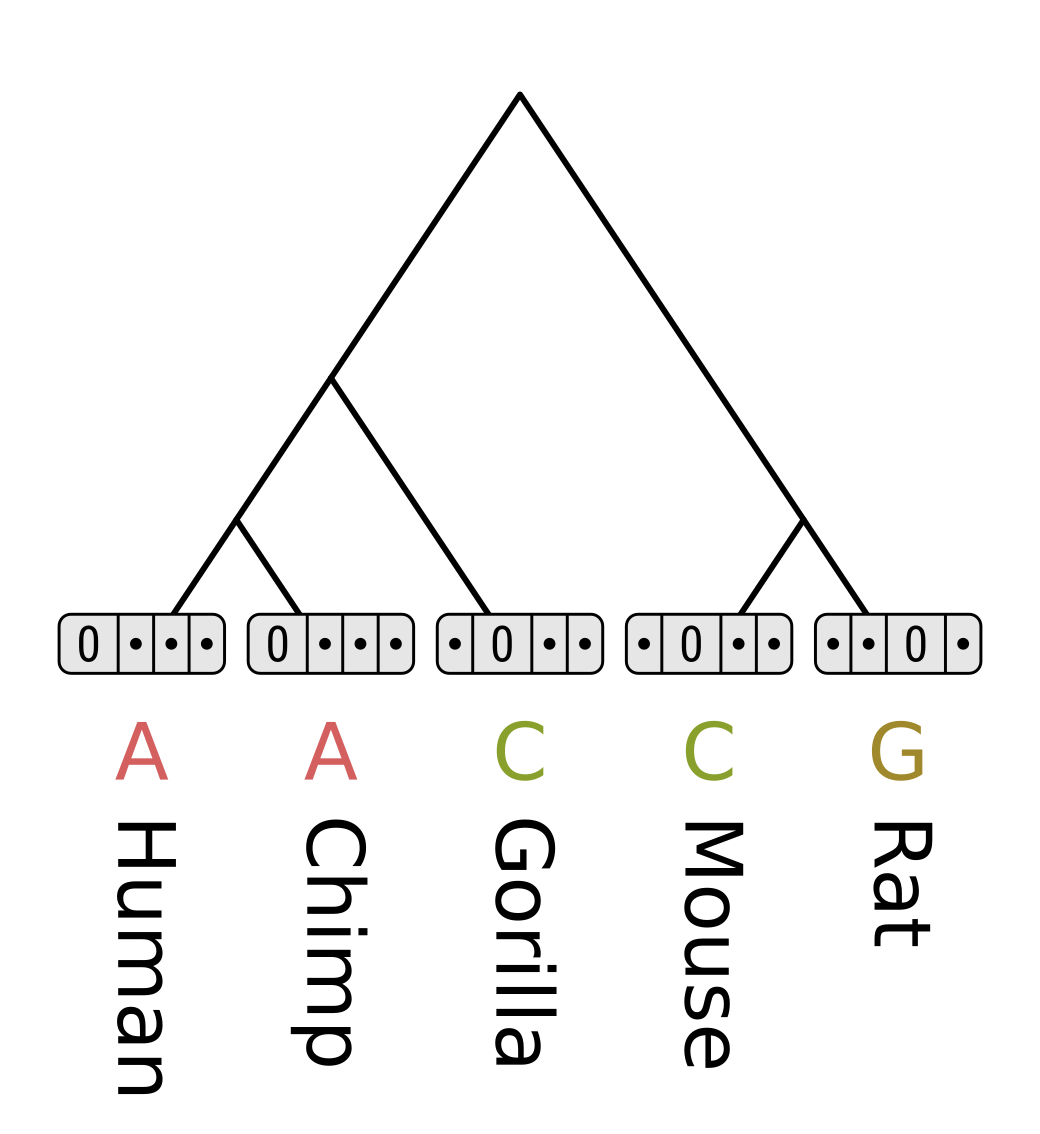 For each element of each internal node, we have to consider the cost of each possible transition for each child branch. The parsimony score for the element is the minimum possible cost for the left branch, plus the minimum possible cost for the right branch. The cost for each possible transition is the corresponding value from the cost matrix, plus the score in the corresponding child element. 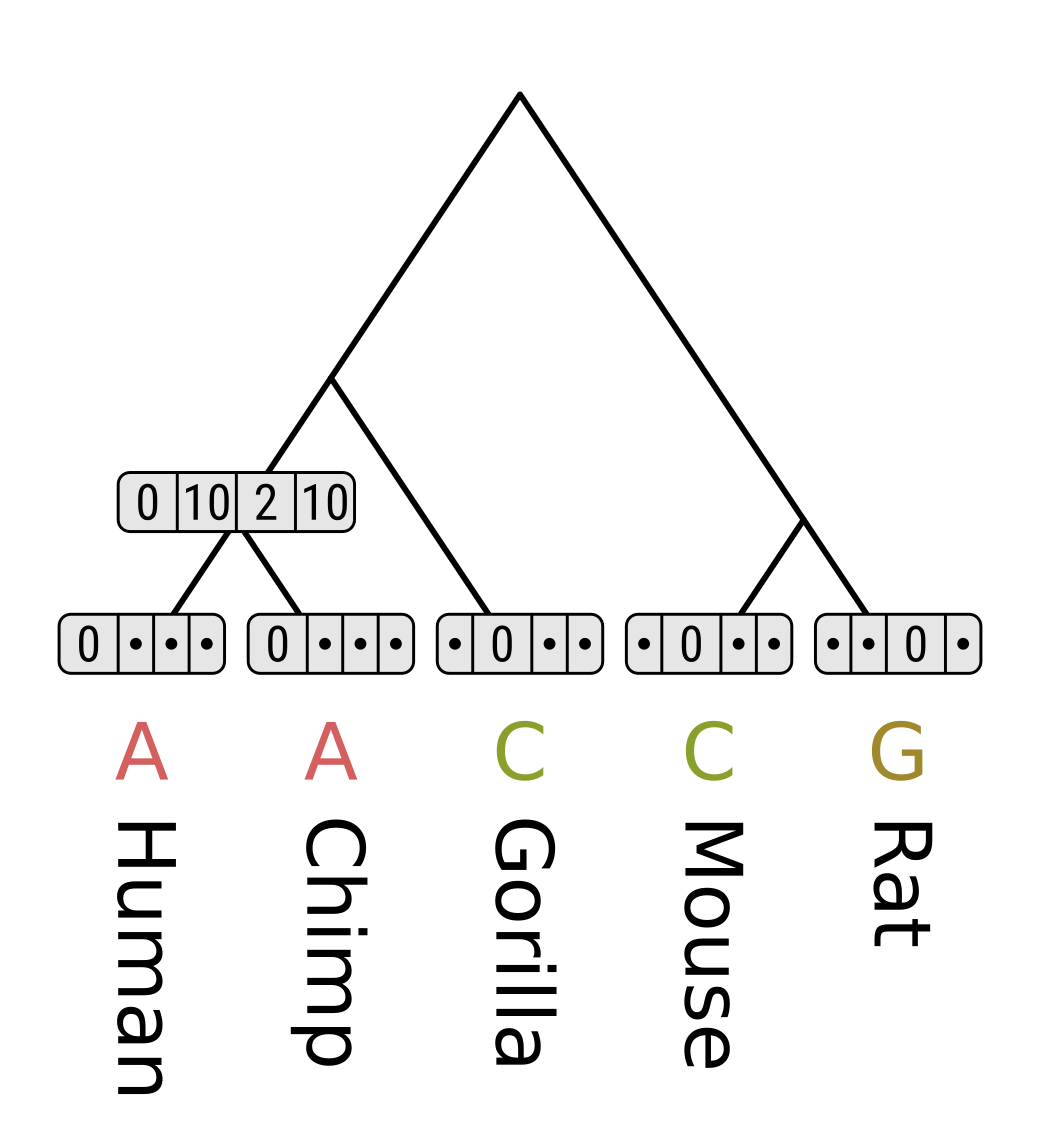 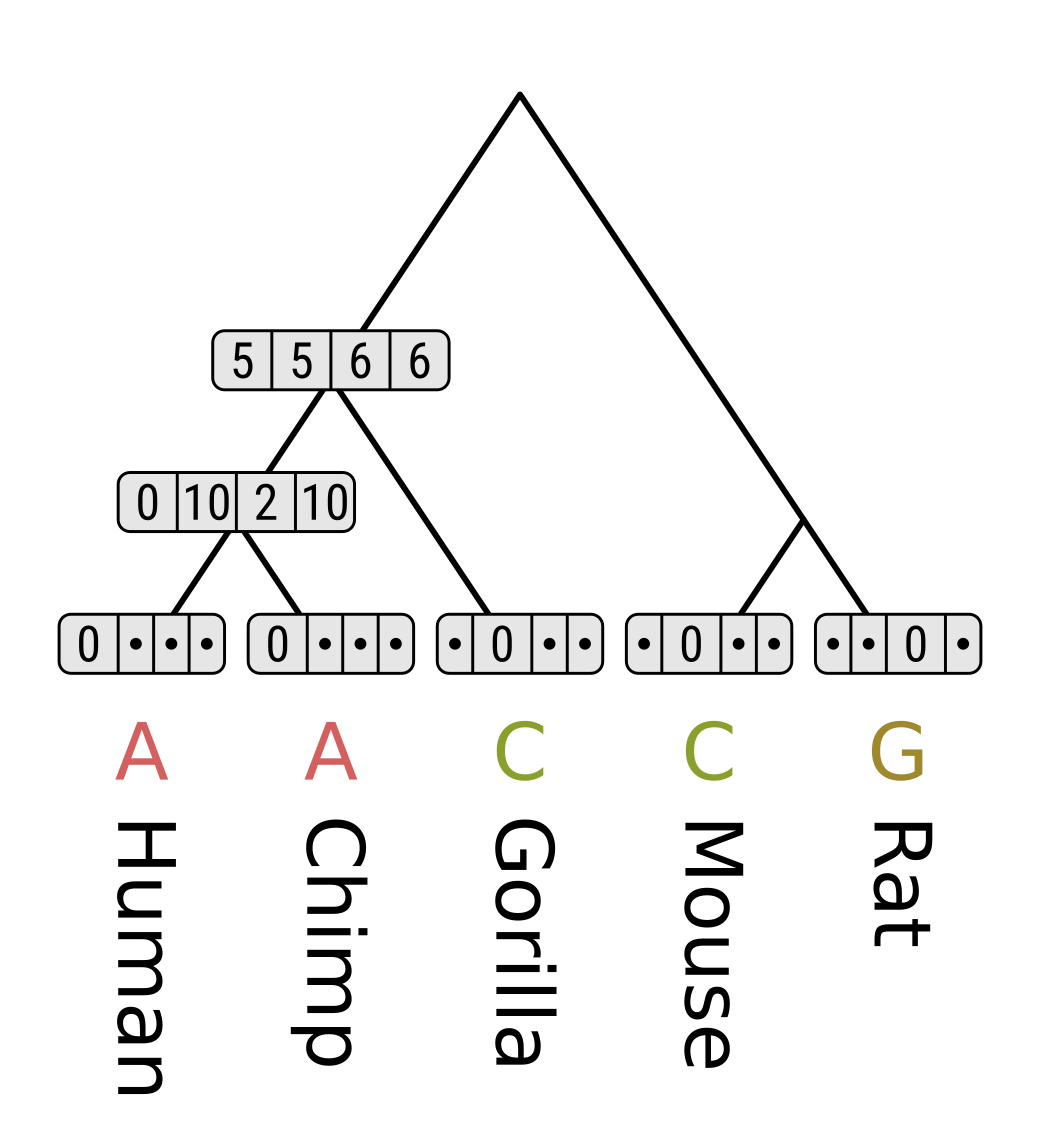 Repeat the above for the remaining nodes. Here we are walking the tree postorder, but like for the Fitch algorithm levelorder would work too. 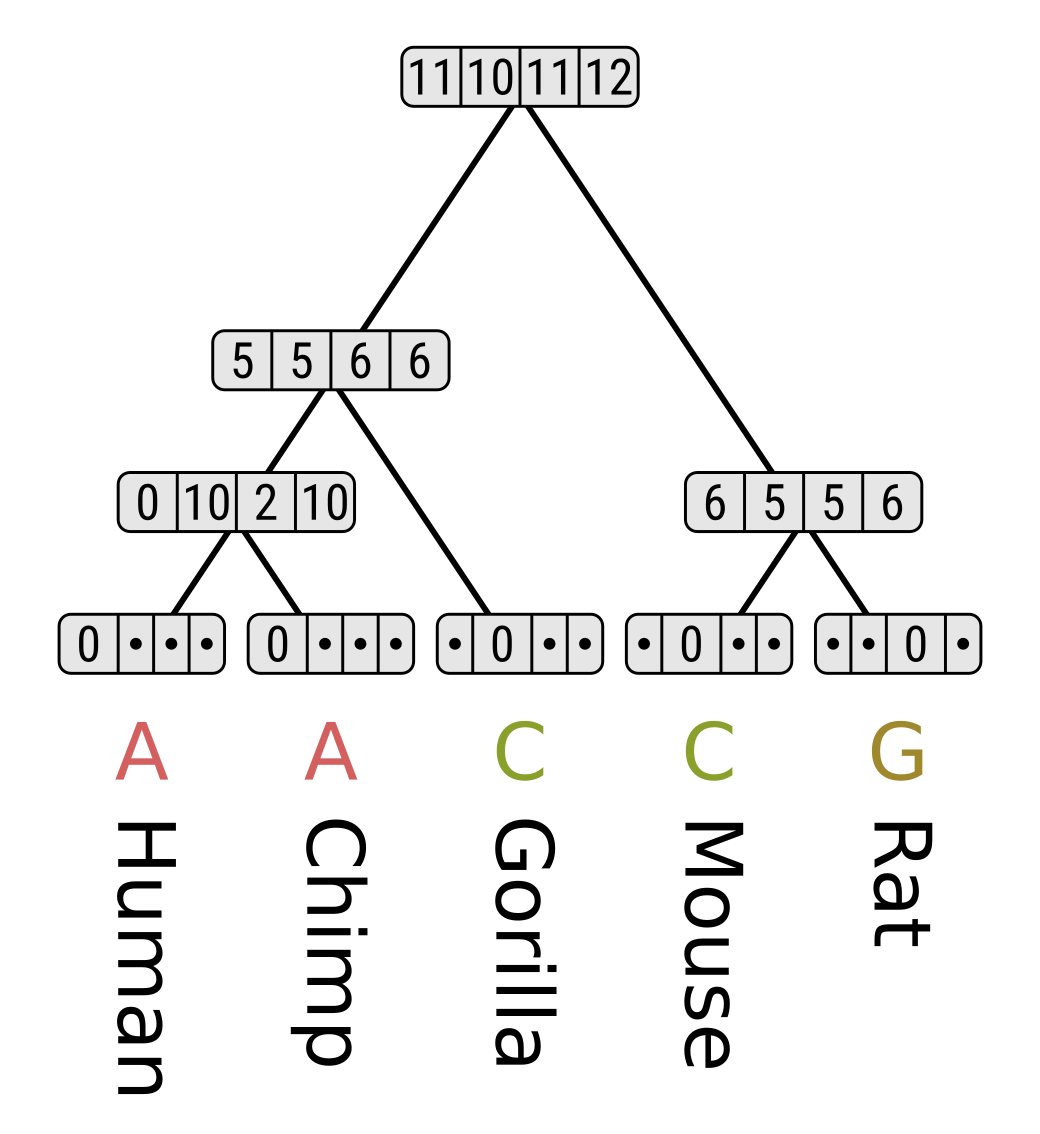 Finally, the parsimony score for the entire tree is the minimum score out of the root states - for this tree and site pattern, 10. As with equal-cost parsimony, the score for an entire multiple sequence alignment or character matrix is the sum of parsimony scores for each position or for each character respectively.